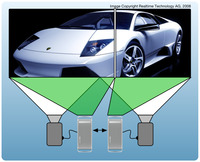 Equalizer is the standard middleware to create and deploy parallel OpenGL-based applications. It enables applications to benefit from multiple graphics cards, processors and computers to scale the rendering performance, visual quality and display size. An Equalizer application runs unmodified on any visualization system, from a simple workstation to large scale graphics clusters, multi-GPU workstations and Virtual Reality installations.

Sequel is an easily accessible interface to the Equalizer parallel rendering framework, and allows rapid development of clustered multi-GPU applications.

GPU-SD is a daemon and library for the discovery and announcement of graphics processing units using ZeroConf. It is used for auto-configuration of Equalizer applications.

Collage is a cross-platform C++ library for building heterogenous, distributed applications. It is the multi-threaded cluster backend for Equalizer.

Lunchbox is a C++ library for multi-threaded programming, providing OS abstraction, utility classes and high-performance primitives, such as atomic variables, spin locks and lock-free containers. It is used as a base library for Collage and Equalizer.

Equalizer is an open platform for high-performance visualization:

Equalizer is a cross-platform toolkit, available for Linux, Windows and Mac OS X and supports both 32-bit and 64-bit execution.

Equalizer does not interfere with the application's OpenGL rendering code. Equalizer requires at a minimum OpenGL version 1.1 in order to run, but uses later OpenGL features and extensions where available.

The Equalizer framework is licensed under the LGPL open source license, which allows free usage in commercial and open source projects. Only changes to the framework itself have to be contributed back to open source.

Please send us your feedback.

I have been working with Equalizer for more than a year now and overall it has been a fantastic experience. Equalizer simplified my development work a whole lot.

I've worked on projects trying to do similar things without Equalizer, and I can honestly say it was pretty bad. We only got it barely working. After finding Equalizer later, I can't imagine how much easier it would have been with such a tool. (source)

Equalizer abstracts the windowing and distribution of shared objects which, trust me, is well worth the overhead of learning it. It's one thing to have each machine running the same rendering thread and it's quite another to send control and input dynamically between them. Plus it runs on Mac, Windows, and Linux. (source)

April 2008, Nicolas Cuntz, researcher at the University of Siegen:

Equalizer bundles multi-node rendering and synchronization tools into an easy-to-use and well-structured object-oriented framework. Porting to Equalizer can be achieved without completely restructuring the application. However, one has to deal with data synchronization and possible problems related to threading and parallelism, which is a problem that cannot completely be delegated to a library.