For stereo viewing, typically two different views are rendered, one for each eye. The display setup ensures that each eye sees the correct view, either by time-multiplexing the left/right images (active stereo) or by using polarization filters (passive stereo). Some autostereoscopic or holographic displays require more than two views, since the project to multiple viewer positions in space.

Head tracking is often used with stereo rendering. The viewer position is tracked, and the rendering is adapted to give the observer the illusion of a fixed scene in 3D space. 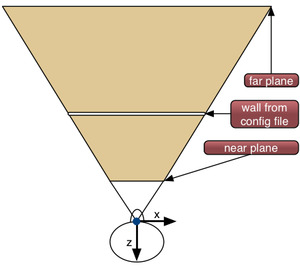 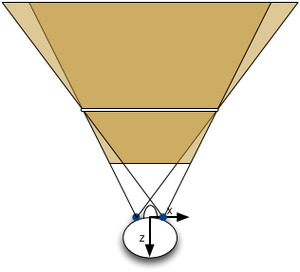 To use active stereo, the window has to have a stereo visual and the compound has to specify the left and right eye using eye [ LEFT RIGHT ]. Equalizer then executes two rendering passes, and uses the eye base to adjust the view frusta as shown on the left.

The window attribute hint_stereo can be used to request a quad-buffered stereo visual. The distance between the left and right eye is specified using the config attribute eye_base. 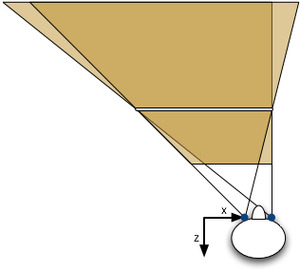 For immersive installations, the head position is tracked and view frusta are adapted to the viewers position and orientation, as shown on the right. The head position is reported by the application using Config::setHeadMatrix, which is used by the server to compute the eye positions (cyclop, left, right). These eye positions, together with the wall description, are used to compute an OpenGL frustum and the head transformation to position the frustum. The default head matrix is an identity matrix, thus the default eye positions are ( +-eye_base/2, 0, 0 ), as shown above in the stereoscopic view frusta. 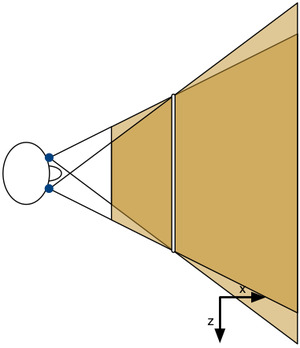 Head-mounted displays move the display 'wall' with the observer, they are fixed in front of the viewer. In Equalizer terms, the head matrix defines the position of the wall. The eyes and the frustum are using the head matrix.

The configuration holds a list of observers. Each observer has its own head matrix and eye separation. One observer tracks multiple views. For further information on multiple observer and their integration with the Layout API please refer to the specification. 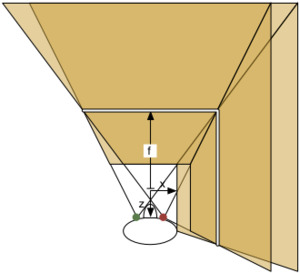 The application has to be able to set the focal distance using Observer::setFocalDistance. The focal distance is either given by the user, depending on the scene, or calculated automatically, e.g., by using the distance of the closest object in the view direction. 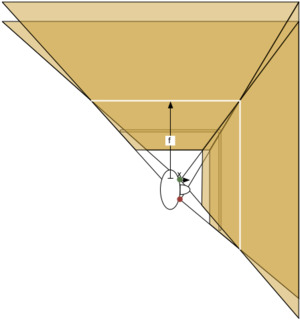 Focal distance relative to the origin

The first implementation computes the focal distance relative to the origin, as shown on the right. This setting might change on a per-frame basis. When the observer moves, the focal distance between the observer and the focused object changes. While this is not semantically correct, it has the benefit of providing a stable convergence plane (see second implementation below).

See below, except use identity head matrix for ratio computation. 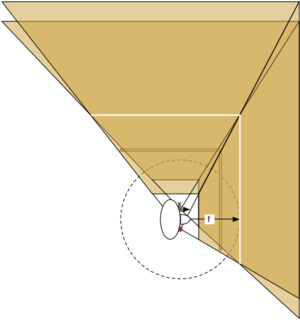 Focal distance relative to the observer

The nearest wall plane in the observer's view direction is placed to intersect observer_position + view_vector * focal_distance. This determines the ratio by which all walls are moved. For each wall corner, the new corner position is corner_new = (corner_old - cyclop_eye) * ratio.

The wall plane equation instead of the 'clipped' wall is used for continuity when the observer looks 'over' a wall. Using the nearest plane ensures that wall the observer looks at is used. If no wall is in the view direction, the last computation is kept. 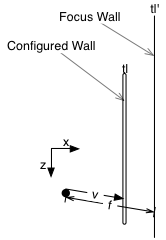 Eye compounds parallelize the rendering of the eye passes, by assigning each eye pass to a different channel and recombining the result. For passive stereo, where the channels are separated for display, parallelization can be achieved by using a different pipe (graphics card) for each channel. For active stereo, one of the eyes can be rendered on a different pipe and transferred to the correct draw buffer using the compound output and input frames. The Equalizer distribution contains example config files.