Stereo or eye decomposition is used during stereo rendering. The individual views for each eye are assigned to different rendering units and later copied to the appropriate stereo buffer. 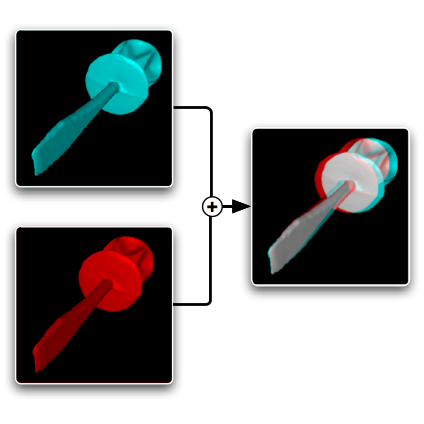 This mode supports a variety of stereo modes, including active (quad-buffered) stereo, anaglyphic stereo or auto-stereo displays with multiple eye passes. Auto-stereoscopic displays have not yet been implemented due to a lack of demand.

Due to the frame consistency between the eye views, this modes scales very well. It is often combined with other modes to achieve further scalability.

The compositing overhead of stereo compounds is similar to 2D compounds, with the exception that twice the data might be copied due to the stereo rendering.

Any Equalizer application can render in stereo and benefit from stereo compounds. Immersive and virtual reality installations are fully supported if the application provides the head tracking data to Equalizer.