2D, also called sort-first or SFR, decomposes the rendering in screen-space, that is, each contributing rendering unit processes a tile of the final view. Equalizer composites the tiles side-by-side on the destination view. 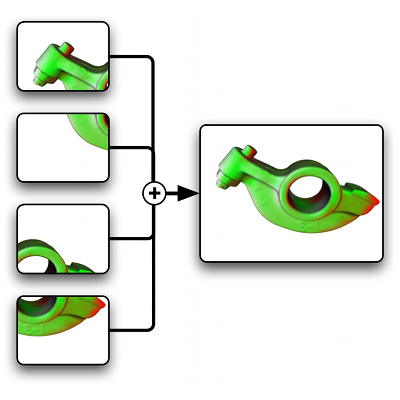 This mode has a low, constant IO overhead for the image transfers and can provide good scalability when combined with view frustum culling. Depending on the application data structure, the overlap of some primitives between individual tiles limits the scalability of this mode, typically to around eight graphic cards.

2D decomposition works transparently for all Equalizer-based applications. It is often combined with a load equalizer, which adapts the tiling automatically each frame.

For typical OpenGL applications, 2D compounds provide good scalability up to four to eight GPU's per display. The scalability depends on the effectiveness of the application's view frustum culling and per-pixel load. Some applications, e.g., volume rendering, provide much better scalability to tens of GPU's.

2D compounds are often used with other features to increase overall scalability, such as stereo, DB or DPlex compounds and load or view equalizers.

The compositing overhead does not typically limit the performance for 2D compounds. Network transfer on a gigabit ethernet limits the peak framerate in the worst case to around 15 FPS for a 1920x1200 resolution per display. For typical scenes, the built-in compression in Equalizer allows 20-30 FPS. On fast networks, such as InfiniBand, or lower resolutions, the network is not a limiting factor.